Center Valley, PA, – It has been a busy month for Andre Williams of All Weather Selvedge Denim Co (AW). Since opening in September of 2021, AW has enjoyed some initial success at the Promenade Shops at Saucon Valley despite the retail market facing heavy headwinds.

First, AW managed to land a spot in the Lehigh Valley Style’s December print Issue. AW also managed to secure a limited partnership with Fox Studios and Intuit Quickbooks to produce a commercial for the NFC Championship Pregame show. Andre shot the commercial in store on December 14 and it aired before the big game on January 30th.

Andre is a 2010 Parkland High School alum who earned an athletic scholarship to play football at Boston College. He was a runner-up for the Heisman in 2013 and went on to play pro for the Giants and Chargers. He returned to the Lehigh Valley in 2020 and opened his first retail location the following year.

To commemorate AW’s success within the mall, The Promenade Shops at Saucon Valley declared Andre the  “denim king of Saucon Valley” and posted as much on their social media handles on January 10th. Currently, AW is looking forward to his Spring/Summer 2022 offering which is slated for production in Los Angeles, California. The highlight of AW season 2 will be the ladies athletic cut which was meticulously created by fitting each member of the English women’s volleyball team.

In honor of Superbowl 56, Andre is offering a deal to customers to earn $500 store credit if they can successfully predict who will win the big game after an in store purchase

Find more information or to purchase visit the links below: All Weather Selvedge Denim Co. Opens at The Promenade Shops at Saucon Valley

Stop by The Promenade Shops at Saucon Valley to explore one of its newest retailers, All Weather Selvedge Denim Co., offering denim with an athletic fit and a sustainable approach. 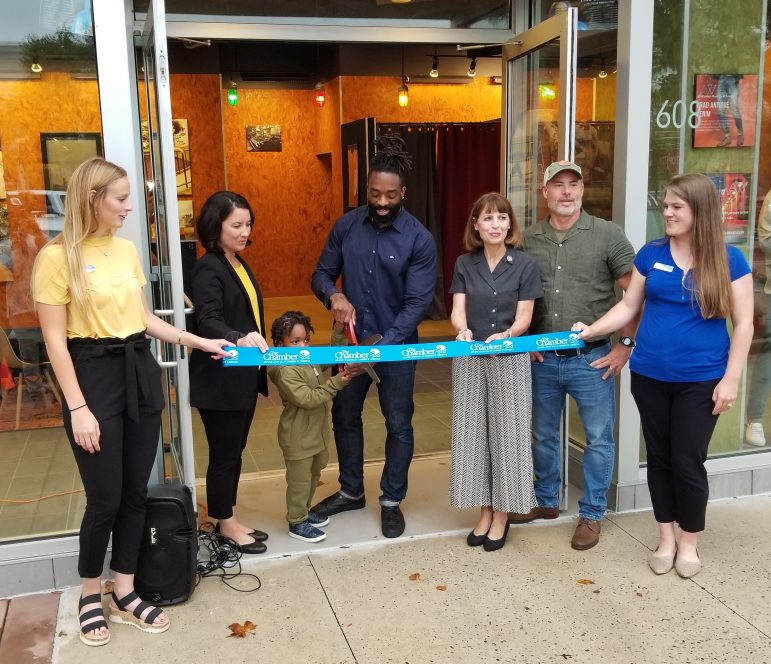 Fans of designer denim have a new local shopping destination to explore, thanks to former NFL running back and Parkland graduate Andre Williams.

Williams, along with family members, representatives from the Southern Lehigh Chamber of Commerce and others, cut the ribbon on his new selvedge denim store at the Promenade Shops at Saucon Valley in Center Valley Thursday.

The concept for All Weather Selvedge Denim Co. (AW) was first developed by Williams in 2016, after he said he had a hard time finding jeans to fit his athletic physique.

Popular in Japan, selvedge denim is a “higher-quality, harder-to-produce type of denim that is typically sold and worn unwashed,” according to DenimHunters.com. 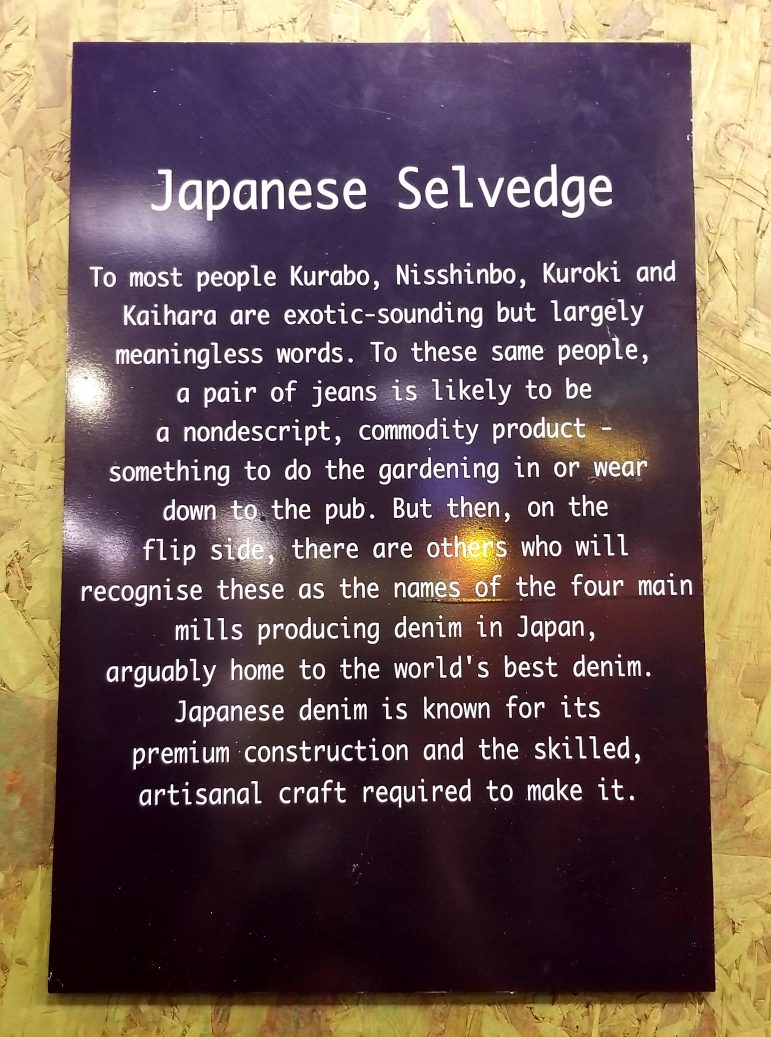 Selvedge denim is popular in Japan, where much of the fabric is made. This sign inside the new All Weather Selvedge Denim Co. (AW) store at the Promenade Shops at Saucon Valley describes the connection between Japan and selvedge denim.

Williams said he initially questioned why a selvedge jean with an athletic fit wasn’t available, but discovered there was a niche market for it and began to build his brand.

“My signature is the athletic fit, but the nuance of fabric that you get from selvedge denim is something, as I’ve been learning–it was originally a U.S. patent, that…after it got so popular–you don’t get this quality anymore; you don’t get the nuance of color and weights and all the great things that come with the fabric,” Williams explained.

“What I want to do, especially my second season, is bring that quality and fabric back to the United States,” he added.

All Weather Selvedge Denim is located in Suite 108 at the Promenade Shops at Saucon Valley, next to Evolve Lifestyle Salon and Spa and across the street from Red Robin.

On Wednesday the seeds for a future ribbon-cutting ceremony were sown near the Promenade Shops, when ground was broken for a new rehabilitation hospital on Center Valley Parkway. 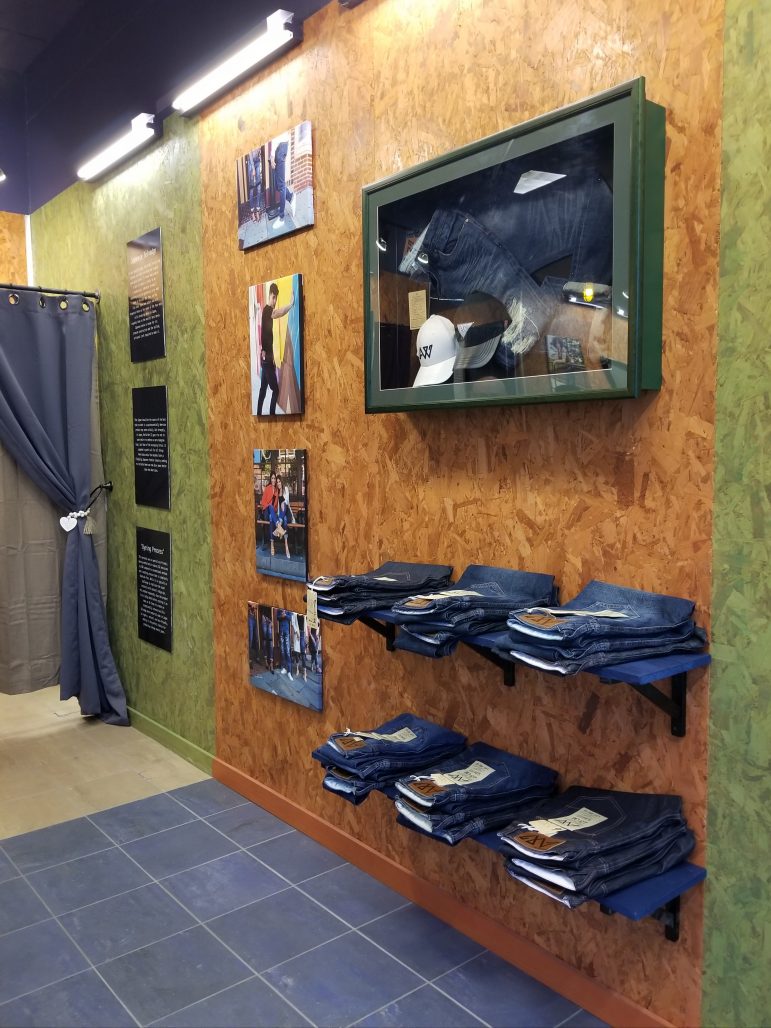 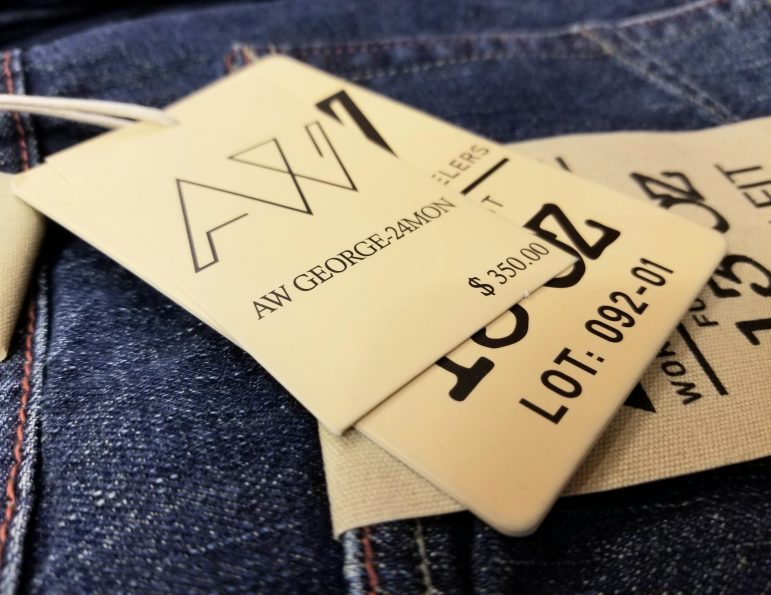 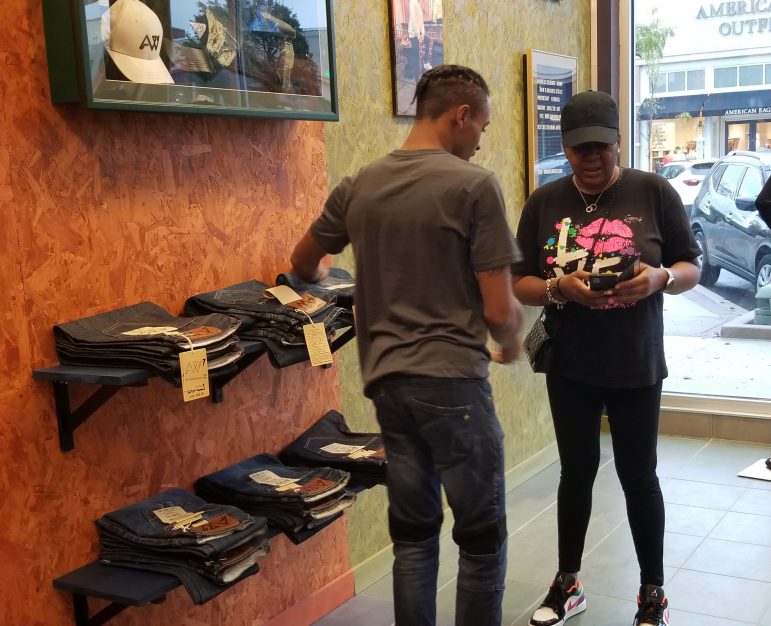 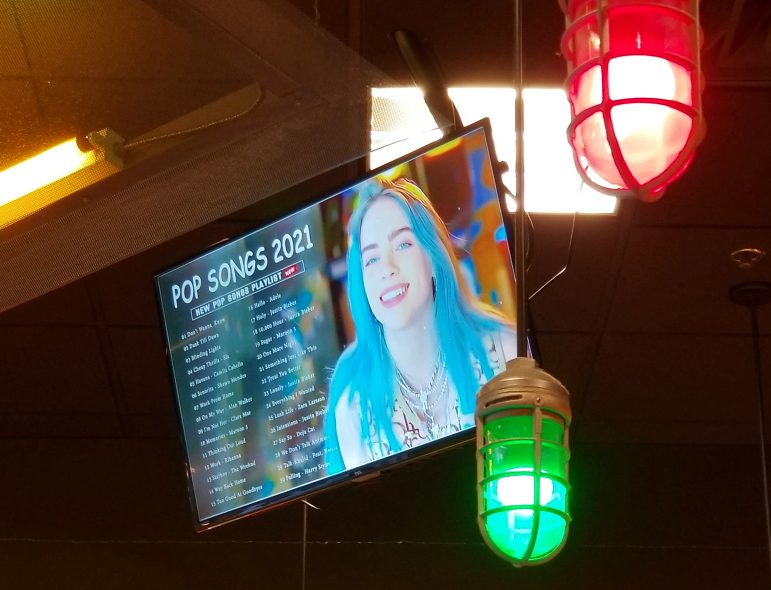 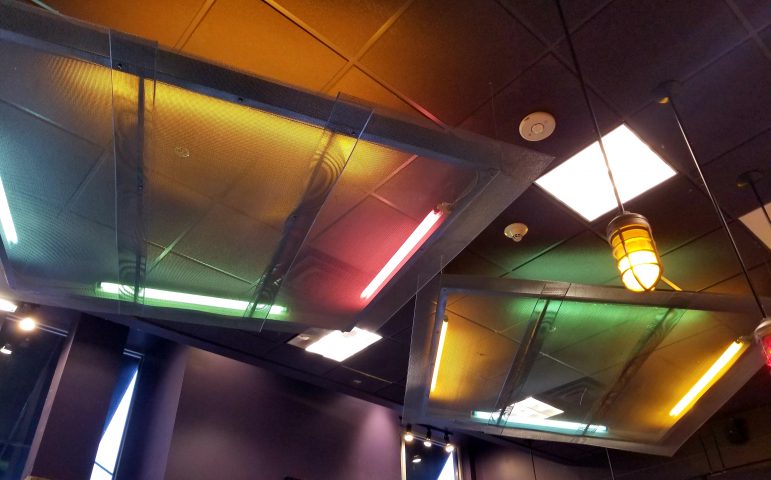 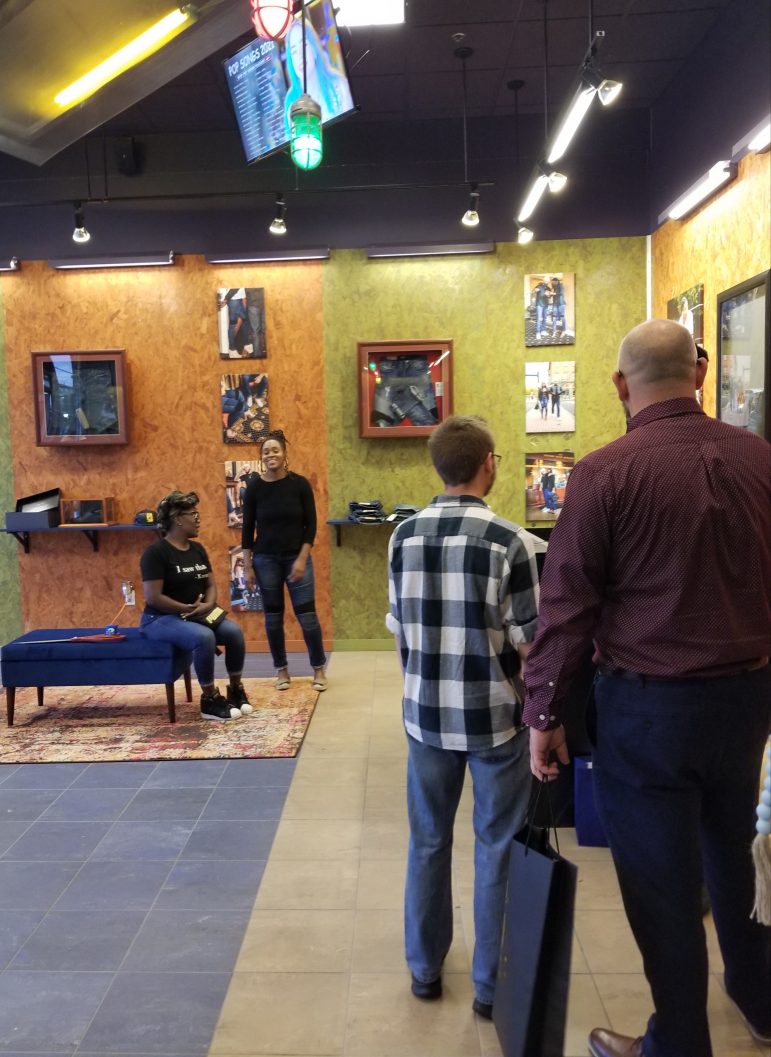 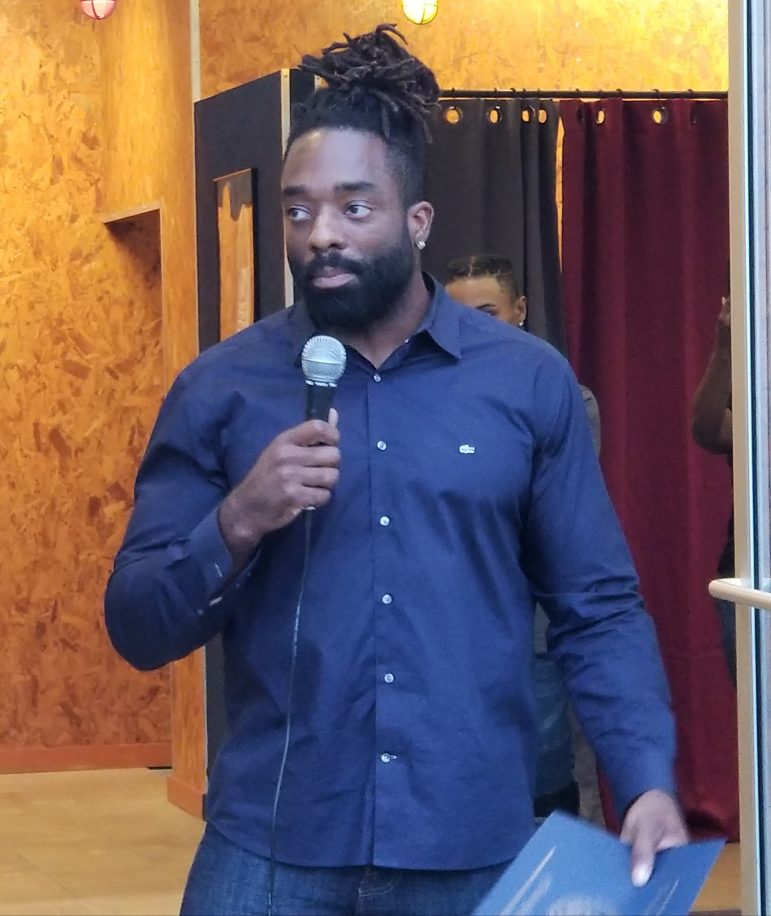 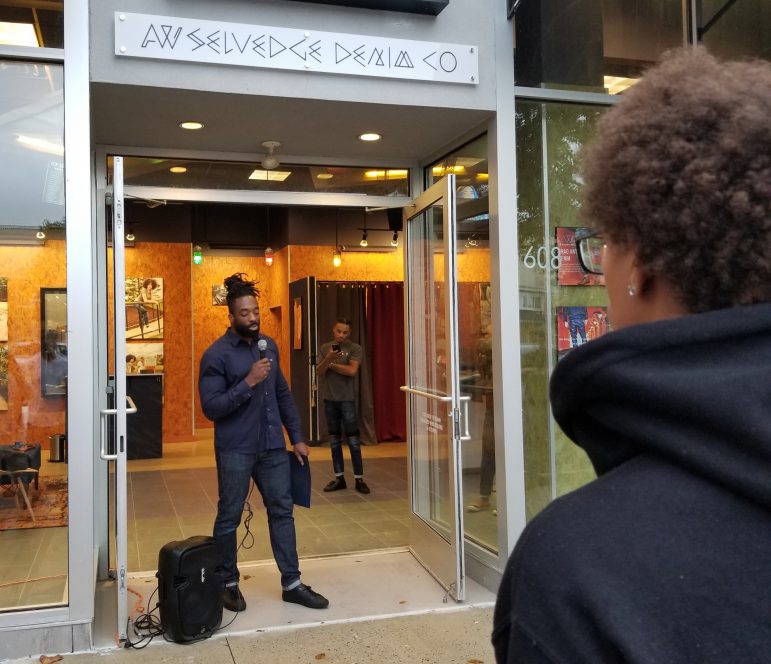 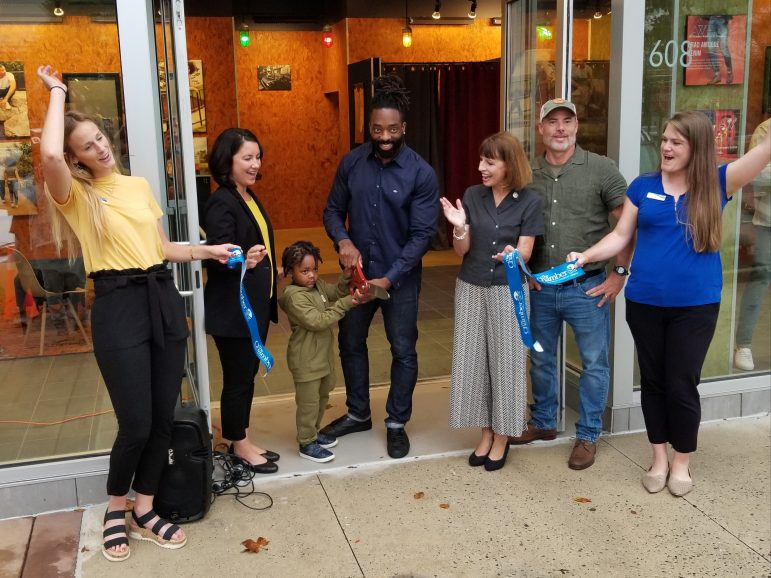 The ribbon-cutting for All Weather Selvedge Denim Co. (AW) is celebrated. 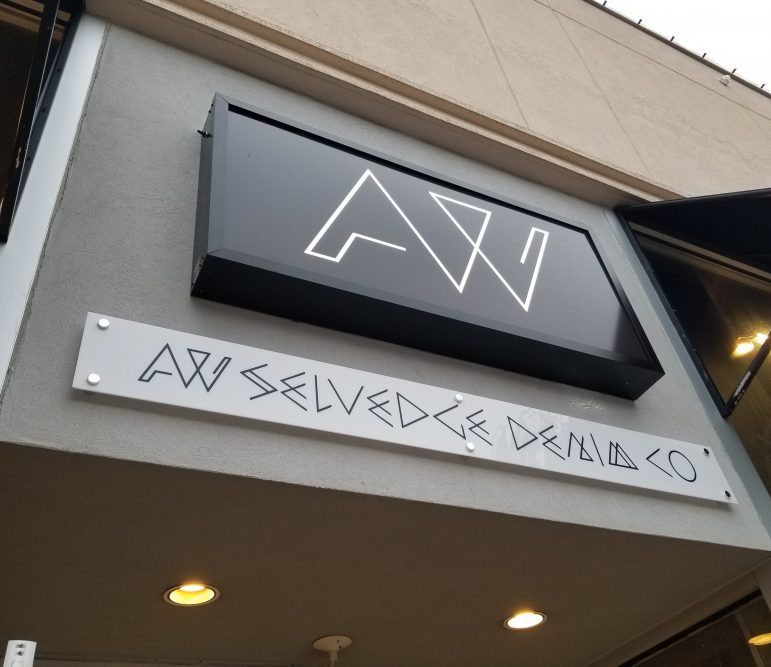 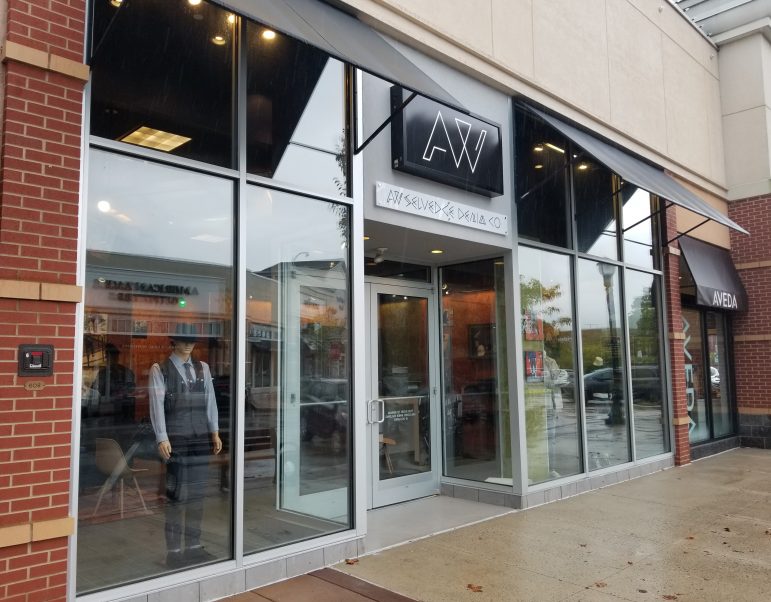 All Weather Selvedge Denim Co. (AW) is located in Suite 608 at the Promenade Shops at Saucon Valley, near Red Robin and the AMC multiplex cinema. 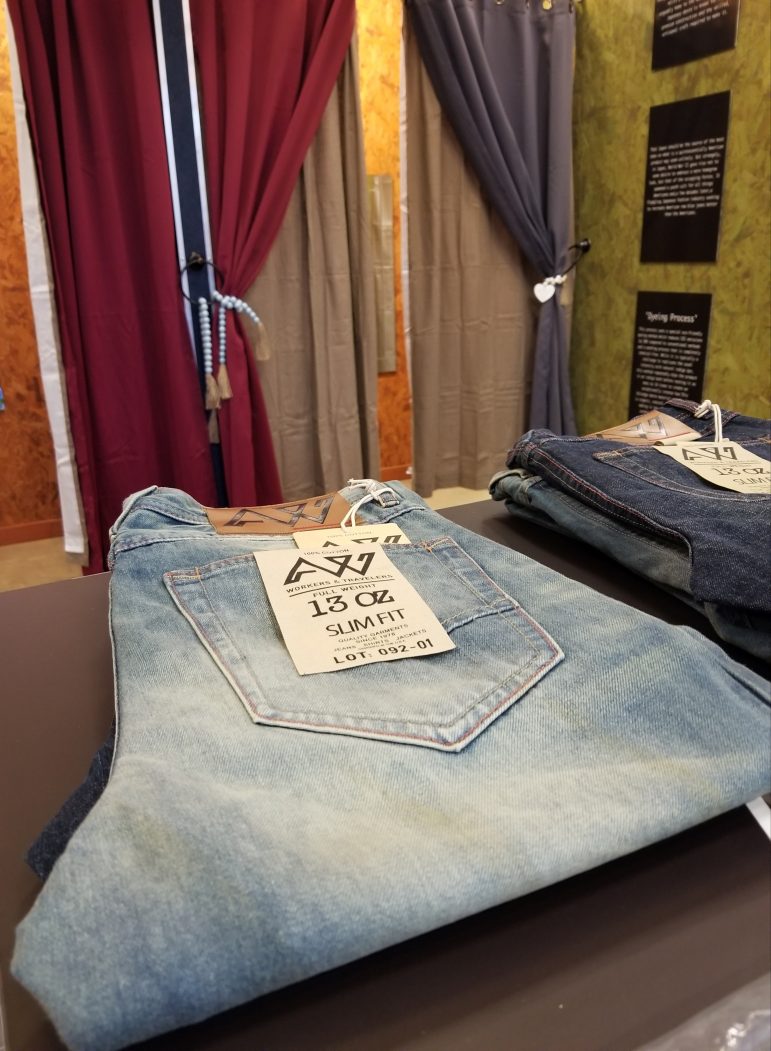 Selvedge denim is closely associated with Japan, although the technology used to manufacture it was first patented in the U.S., said All Weather Selvedge Denim Co. owner Andre Williams. Williams’ brand’s specialty is athletic-fit jeans. 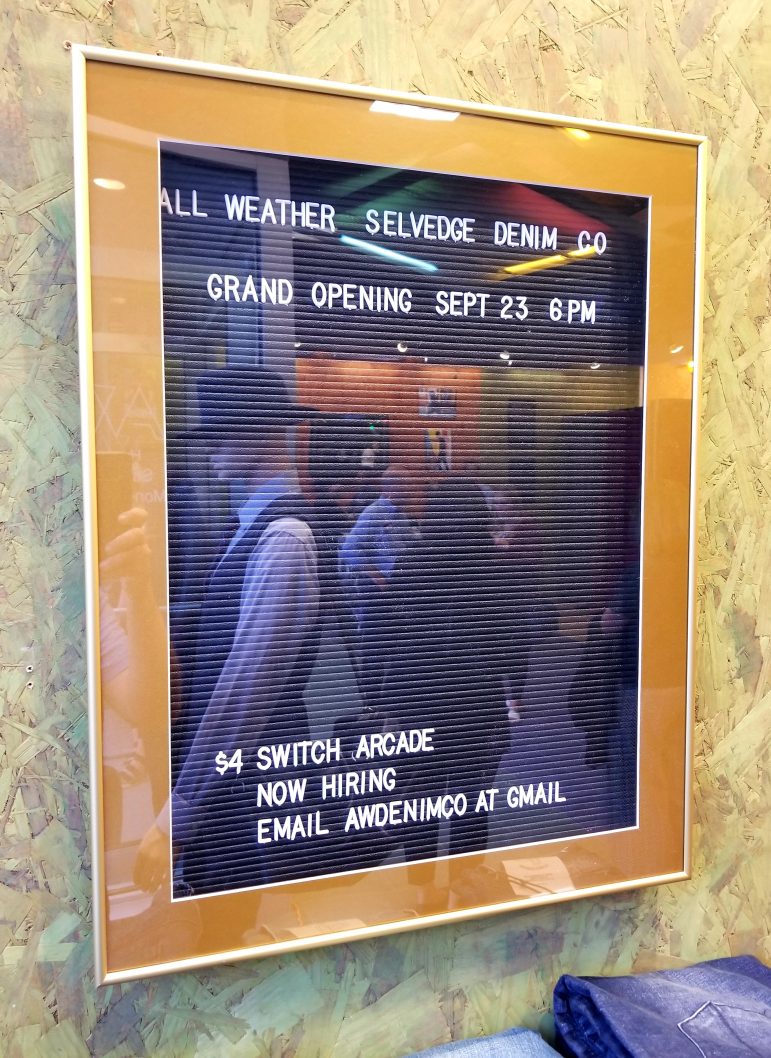 A sign inside the All Weather Selvedge Denim Co. store at the Promenade Shops announces Thursday’s grand opening and ribbon-cutting ceremony, which was held together with the Southern Lehigh Chamber of Commerce.

A former NFL running back is looking to score again in a different arena with the upcoming opening of his first retail store at The Promenade Shops at Saucon Valley.

All Weather Selvedge Denim Co. (AW), specializing in denim jeans made from proprietary Japanese selvedge fabrics, is expected to open in August — “hopefully Aug. 1” — in Suite 608, according to owner Andre Williams, who played with the New York Giants and San Diego Chargers in the mid 2010s.

AW’s jeans are made from 100% organic cotton, dyed with a natural indigo dye and feature raw and washed styles as well as a signature athletic fit, with a “roomier top block that remains fitted below the knees,” Williams said.

The 2010 Parkland High School graduate, who played football collegiately at Boston College, founded the denim company as a mostly online venture in 2016.

The business arose out of Williams’ frustration with the uncomfortable fits of many mainstream jean brands. He found himself ripping a few pairs over the years and eventually gave up wearing jeans altogether — that is, until he collaborated with a design team to create his new denim-focused fashion company.

“What I did was made [the jeans] fit somebody who has an average waste size — between 28 and 40 — but who also has thighs larger than the average person,” Williams said. “So, there’s more space in the thigh area, but it still has a fitted look below the knee.”

Selvege refers to the narrow, tightly woven band on the edge of denim fabric. A selvedge, or “self-edge,” prevents the denim from unraveling and shows a “clean, finished look,” according to a message on the business’ website.

“Selvedge denim is made out of denim woven on an old-style shuttle loom, with a continuous weft,” the message continues. “This process retains the irregularities and rough-hewn nature of true denim.”

“My idea was not just to make a new fit but also make a high quality pair of jeans,” Williams said. “Originally, jeans were workwear. They were made for durability, and they’ve kind of fell away from that.”

Williams, who lives in Schnecksville but is readying to move to Bethlehem, is excited to open the first storefront of his blossoming company at the Upper Saucon Township shopping center.

“It is an honor to join the Promenade Shops at Saucon Valley,” Williams said. “I look forward to crafting a unique shopping experience and providing customers with top shelf denim products for all occasions.”

The former NFL player, who retired from professional sports after a brief stint in the XFL with the Houston Roughnecks in 2020, plans to offer a wide array of jeans, including men’s styles from AW and men’s and women’s styles form AW’s sister brand, DKShin, featuring jeans crafted from stretch denim and accented with genuine leather patches on the knees, biker-inspired stitching and a concealed hook and zip fastening.

Williams also hopes to expand AW’s line in the fall or winter to include women’s jeans with multiple fits.

In addition to jeans, the store also will carry shoes from Williams’ shoe line, Runningman Shoes, as well as shirts, jackets, hoodies and accessories.